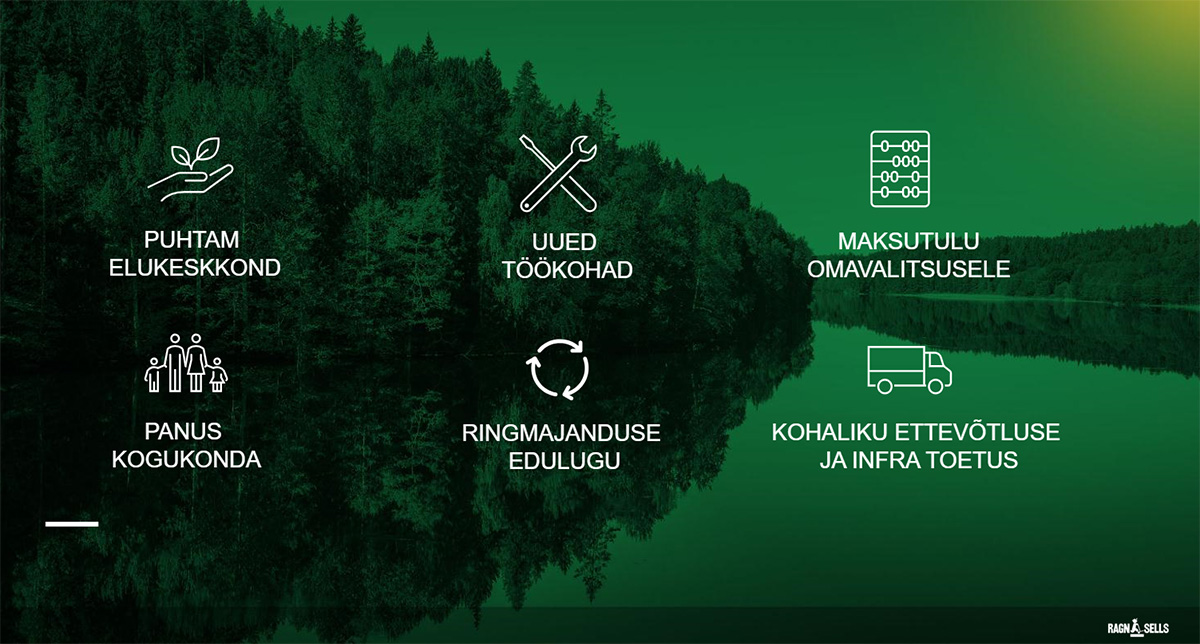 On 29 June 2020, the representatives of Ragn-Sells AS met with the representatives of the local government, entrepreneurs and people of Narva-Jõesuu to introduce the idea of a plant based on an innovative oil shale ash valorisation process which will help to significantly reduce the environmental impact of oil shale ash in the future. The company plans to file an application for the initiation of a special spatial plan to the local government soon.

Ragn-Sells AS established a subsidiary in Estonia, RS-OSA Service OÜ, for the oil shale ash valorisation research project launched five years ago. Today, a scientific consortium has been established under the management of the company, in which researchers from the University of Tartu and Tallinn University of Technology also participate in conducting basic and applied research. Recently, the Archimedes Foundation joined as a co-sponsor of the research.

The CEO of Ragn-Sells AS, Mr Rain Vääna said, that it is one of the largest circular economy projects in Baltics and Nordic countries, where the materials deposited in the ashes will be repurposed and therefore improve not only the natural environmenta, but also the whole living environment of the local people.

Research into solutions for recycling the ash from combustion of oil shale for electricity is focusing on the chemical composition of the ash and ways of recovering the chemical compounds for industrial production of materials. Such technologies would help ease the load on the Ida-Viru County environment and reduce the need for quarrying other natural resources in Europe and around the world. The aim of the technology is to enhance over 1 million tonnes of ash per year using a carbon-neutral process.

Ragn-Sells has many years of experience developing and launching circular economy solutions. This May, Ragn-Sells Group announced the launch of the construction of a new fly ash enhancement plant near Stockholm, Sweden. When it is completed two years from now, the plant will allow close to one-half of the fly ash generated in Sweden to be valorised as industrial salts.

Ragn-Sells Group is a Swedish family enterprise, which operates in four countries. The company was established in 1881and specializes in the development and provision of solutions that support recovery and the circular economy. Ragn-Sells Estonia employs 275 people and the company has a turnover of 27 million euros.